TK Engineering, a specialist in distributed control systems, has developed a control system solution for a translifter implementation.

Contik approached TKE to design and develop a control system solution for a prototype translifter project. The customer was in the process of developing a new line of translifters with better performance, cost effectiveness and reliability. Based on the requirements and functional specifications given by the Contik we designed, developed and commissioned a CANopen based control system for the translifters.

The project was divided to responsibility sectors between four major companies. TKE was in charge of system architecture design and control system development. We worked closely together with Contik and the other stakeholders to achieve the best outcome. As a result, the modular system design makes the designed system more future-proof, cost-effective, extendable and efficient. The larger upfront cost of a modular system is mitigated multiple times in running costs over the life-cycle of a product line.

“I would like to thank all the participants – our innovative personnel as well as the industry’s top partners who were involved in the successful project. Especially, TKE played a significant role in the development and implementation of the translifter control system. The next generation translifter enables great advantages in the form of the translifter reliability, usability and the durability of the undercarriage. These could easily be transformed into end-customers assets by enabling significantly lower maintenance costs as well as easy adaptation of control parameters. As a result, the modular structure of the translifter control system can be utilized throughout the entire system from the mechanical solutions to the higher level control system. The modular structure is easily scalable between our different translifter models from 40 to 120 tons”
Timo Jäppinen, CONTIK group Oy

The design and development process of translifter control system

TKE started the design and development process with analyzing the requirements and functional specifications given by the customer. The focus of the project was to create a distributed modular control system with future product line expansion capabilities. The modular structure of the control system allows the managed re-use of developed entities in future translifter versions.

With strong knowledge in mobile system design and CANopen the control system implementation was designed to be expandable and maintainable with minimal effort. Safety and performance requirements of the control system were efficiently fulfilled with use of CANopen system integration framework.

The main control unit of the system was implemented using a programmable logic controller (PLC). Development of the control software was done entirely by TKE following the IEC 61131-3 standard [1] languages to ensure cross-platform compatibility of the software. Codesys was used as the development environment for the control system implementation. The main controller application implementation takes care of top-level controls, NMT-master functionality and system status monitoring.

Utilization of CANopen system integration framework enabled the use of off-the-self components for control system implementation. A CANopen compatible CiA-406 device profile [4] specific linear sensor was used for measuring the steering angle of the translifter bogie. This was done to reduce the control system development costs and to increase sensor replace-ability and flexibility.

TKE assisted the customer in the assembly process of the control system installation and with general knowledge of mobile system commissioning. As a result customer achieved a smooth and efficient assembly process. 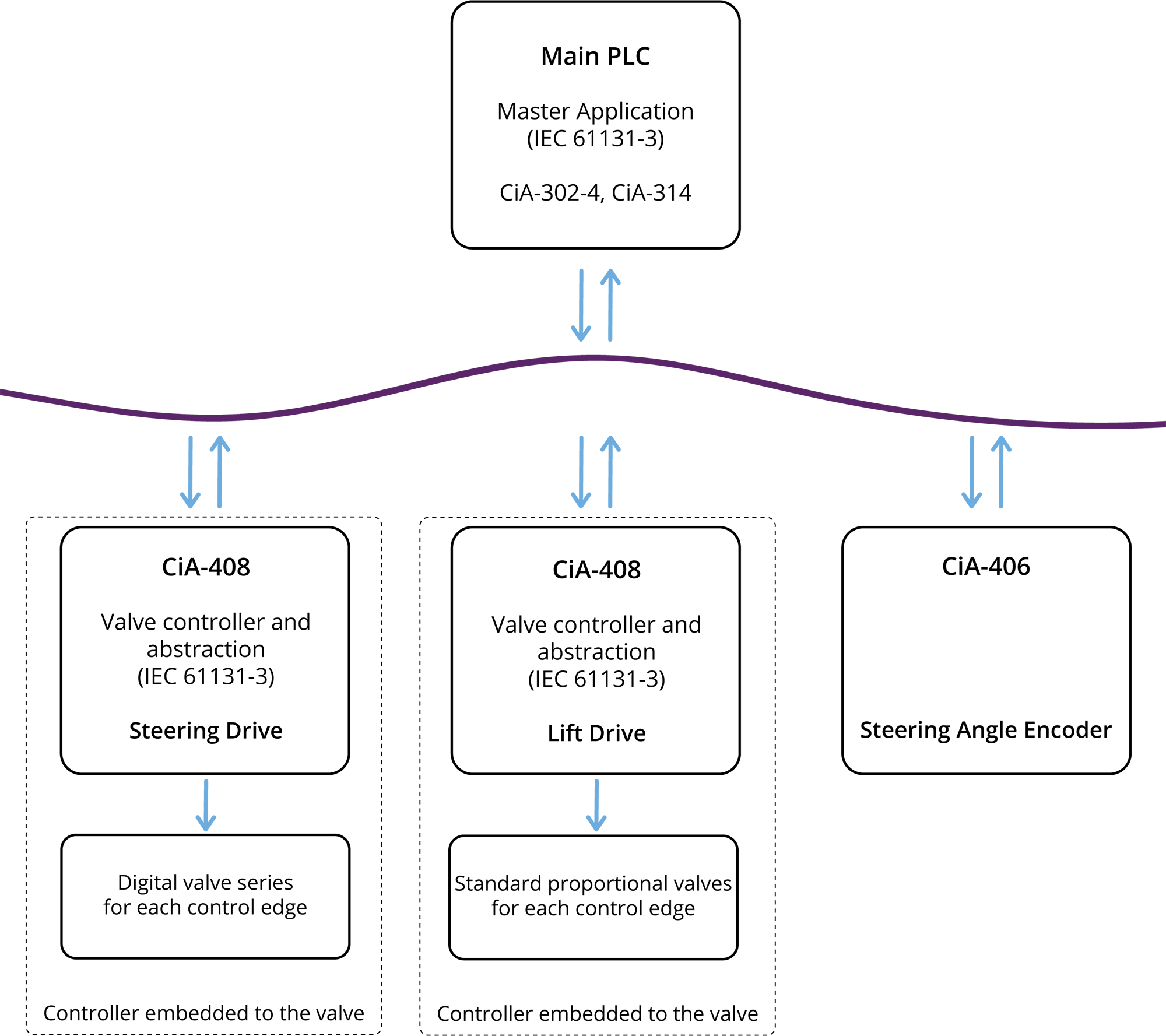